When I stumbled onto these Einstein quotes (not sure which are his exact words, but their meaning is obvious ): 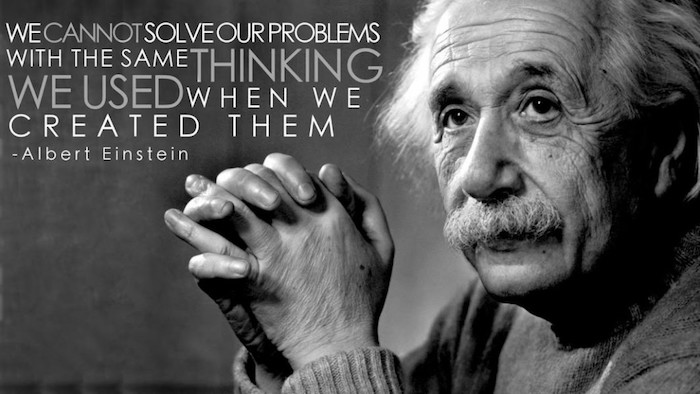 “The thinking it took to get us into this mess is not the same thinking that is going to get us out of it.” – Albert Einstein

This was my first hint that my thinking (not my doing) might be the source of my problem and where I should focus my attention.

After some self-analysis, I realized my approach to success was based on a belief system (a set of thought patterns) I learned early in life.

That belief system was based on hard work and dedication, and it led to my success in high school, college, and the first half of my professional career.

Interestingly, those same thoughts and beliefs are what kept me stuck for almost a decade banging my head against the glass (like the housefly) never breaking through, sentenced to slow incremental progress—disproportionately small results compared to the effort.

The First Law of Holes: “If you find yourself in a hole, stop digging.”

So the first thing I did was to STOP!!!

This lead to the discovery of the second secret.

If you have not read the book 7 Habits of Highly Effective People. Do yourself a favor, buy it and read it. 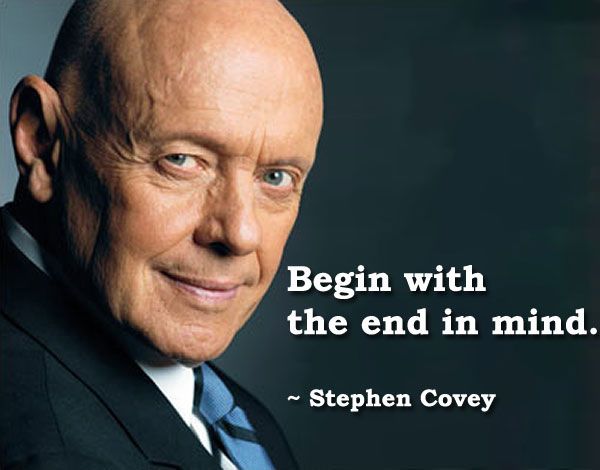 When I read Habit #2 I was immediately struck by the following:

“To begin with the end in mind means to start with a clear understanding of your destination. It means to know where you’re going so that you better understand where you are now and so that the steps you take are always in the right direction.”

“It’s incredibly easy to get caught up in an activity trap, in the busyness of life, to work harder and harder at climbing the ladder of success only to discover it’s leaning against the wrong wall. It is possible to be busy—very busy—without being very effective.” – Stephen Covey

Wow!! It can’t get more profound than that… right?

This was eye-opening stuff for me. I began to see where I was going wrong.

Sure, I was doing a lot of stuff but to what end? If I did not know the destination I was targeting how will I ever reach there?

Just when I thought it couldn’t get more profound, Covey hit with this:

All Things Are Created Twice:

“Begin with the end in mind” is based on the principle that all things are created twice. There’s a mental or first creation, and a physical or second creation, to all things.

That all but sealed the deal in my mind.

That was a Big Revelation.

I was busy all of my professional life focused on taking charge of the Physical or Second creation all the while ignoring the responsibility of the Mental or First Creation.

I was not consciously aware that there was a First Creation until Dr. Covey explained it above.

“Begin with the end in mind” is first and foremost what I’ve come to call an “Inside First Concept or Principle“—It starts within, with me, with the First Creation (mental).

This was the first step towards me developing a new concept of myself.

And it formed the basis for what evolved into what I now call my Success Framework.

Before this revelation, I was living an Outside First life. Reacting to what I was experiencing vs. consciously and deliberating deciding what I want and first creating it mentally (beginning with the end in mind).

I had unknowingly surrendered all my power to the Outside (other people). And the Outside dictated almost all aspects of my life especially my career. Hence my results or lack thereof.

My attention was focused all on the physical and at the micro level, on my work tasks, projects, and the company’s goals, instead of MY Destination, MY Core Values, and MY Life Goals.

And as a result, life was unfolding for me not by MY Design but by Default. Here is how Dr. Covey summed this up:

It’s a principle that all things are created twice, but not all first creations are by conscious design. In our personal lives, if we do not develop our own self-awareness and do not become responsible for first creations, we empower other people and circumstances outside our Circle of Influence to shape much of our lives by default. We reactively live the scripts handed to us by family, associates, other people’s agendas, the pressures of circumstance—scripts from our earlier years, from our training, our conditioning.

Shortly after I changed my thinking (Einstein) and begun to live Habit #2 especially the principle that all things are created twice, first mentally, and second physically. EVERYTHING started to fall into place.

I never begin a Journey without first clearly creating the destination in my mind’s eye. Only then does the action part, the doing and what we refer as hard work matters.

Whenever I fell off the wagon and went back to my old Outside First ways, my results suffered. I always either took the wrong actions or abandon my plans prematurely. When I did have some success, it will be short-lived. I always seem to fall back to where I started. It was frustrating as hell.

“Yes, yes that’s what’s been happening to me,” said Carl.

I can see the wheels turning in his head.

“So did your Inside Out, Success Framework help you get into your VP role with your company?”

“And not only that…but everything I have achieved over the last eight yrs or failed to achieve is the direct result of my application or lack of application of these Inside First principles”.

“Carl, if you decide to press forward and commit to your goals, the most immediate being an elevation in your career, i.e., become a Director of Tech. Then you can use these Inside Out principles to help you win”.

And so it began.