No doubt Carl’s career and life look successful to someone looking in from the outside.

That’s roughly two decades of hard work. And what you are seeing is the residual of those early wins and rewards.

Back then the effort was commensurate with the reward and salary increases moved the needle in a big way. Promotions were more frequent and notable. Like the time he was promoted from a Software Engineer II to a Senior Software Engineer and made the Technical Lead for a critical program.

That came with a big raise and new title. Carl was proud of his accomplishments, and the recognition. The future felt promising.

However, the reality is that today, and in fact, for most of the last decade, it’s different.

The workload never stopped increasing, but the payoff has slowed way down.  Carl also now has a family which makes the payoff from work even less appealing.

Yes, Carl changed jobs and roles over the last ten years which is progress, but the results were incremental nothing transformative.

So when Carl’s Boss Tony the Director of Technology announced that he was retiring in 6 months, Carl saw this as his Big Opportunity.

Director of Technology is a prominent position. For Carl it meant

Finally the opportunity to get back on track and Reclaim that The Lost Last Decade.

Things looked even more favorable for Carl when the company announced that they would fill the job from inside.

The plan was to announce the successor in 3-4 months to allow for some overlap between new Director of Tech and Tony.

Carl was excited. Carl and Tony had a great relationship, and Tony was supportive of Carl’s decision to throw his hat in the ring.

Carl also spoke to Ed the VP of Engineer about the position who told him he was highly regarded and should apply.

From the sidelines, I’ve been monitoring the situation with great anticipation.

As the weeks progressed, many colleagues dropped hints that Carl was going to be the next Director of Tech. Some even started calling him Mr. Director.

Carl and Sue started thinking (and dreaming) again about some of the plans they had put on hold.

To Carl, it was euphoric just imagining the possibilities again. He couldn’t remember the last time he allowed himself to dream a little.

With each passing week, Carl grew more confident.  It was starting to feel like a done deal. He still had to interview for the job, but that was a mere formality.

As luck will have it, with 30 days to go before the 3-month decision point, Tony called Carl into Tony’s office and told him the company decided to open the Job position to external candidates.

His stomach felt like someone knocked the wind out of him.

In a flash, he saw all the possibilities, his hopes, his plans, all scurrying into the dark corners of his mind. Back to where they were hiding for the last decade. It was like watching a video in rewind.

The cheer and sunshine were gone, replaced by sadness and gloom.

Carl was deflated. He didn’t know what to say.

Tony’s lips were still moving, but Carl didn’t hear a word because he wasn’t mentally there.

Maybe Tony was trying to reassure Carl that he was still in the race?

Somehow Carl managed to pull himself out of the daze, regain his composure, and with great effort muster a polite smile, nod and left.

When Carl shared that story with me at Mike’s Grill, it became clear why my friend was so angry, sad and worried.

I’d probably have the same reactions if I were in Carl’s shoes.

And now he had to go home to break this news to Sue.

It occurred to me that the fact that the company opened up the search to include external candidates probably means they decided Carl was not “The Guy”.

This likelihood must have occurred to Carl as well. In fact, I am sure that’s what he concluded as well.

Despite Carl’s pain, I had to ask the uncomfortable but necessary question… I had to bring myself to ask him is “WHY?”

“Carl Sanberg, Director of Technology, what was I thinking?”

The way I see it Carl you have two choices. 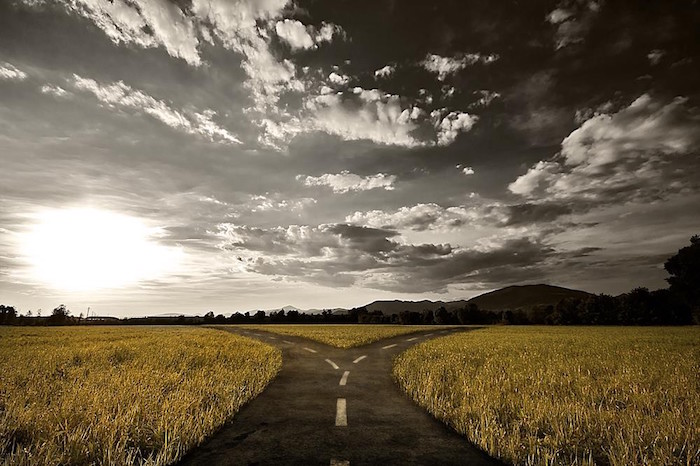 First Choice: You can accept defeat, put your tail between your legs like a scared dog and go in a corner, lick your wounds and rejoin the heard.

Is that who you are?

Forget for a minute what Ed and the Vampires may think or say about you.

Who does Carl say he is?

Because listening to you this sounds like it is a deeper issue than just losing this specific opportunity.

“What do you mean?” said Carl.

Did you listen to yourself?

All I can tell you is that you reminded me of someone I used to know very well.

“The old me from 8 years ago” I replied.

I came to that fork in the road and I had to choose which path to take.

Quit and Give Up. Remain Status Quo. That’s the same as the First Choice: To Accept Defeat and Conform. Stop Striving.

You can Press Onwards! And that’s your Second Choice.

I chose to move forward. The Second Choice. I was determined to figure it out. I was not about to give up on me.

So Carl, ALL THAT MATTERS IS THIS:  What Are You Going To Do Now?